Clinical cases treated with froggymouth only​ 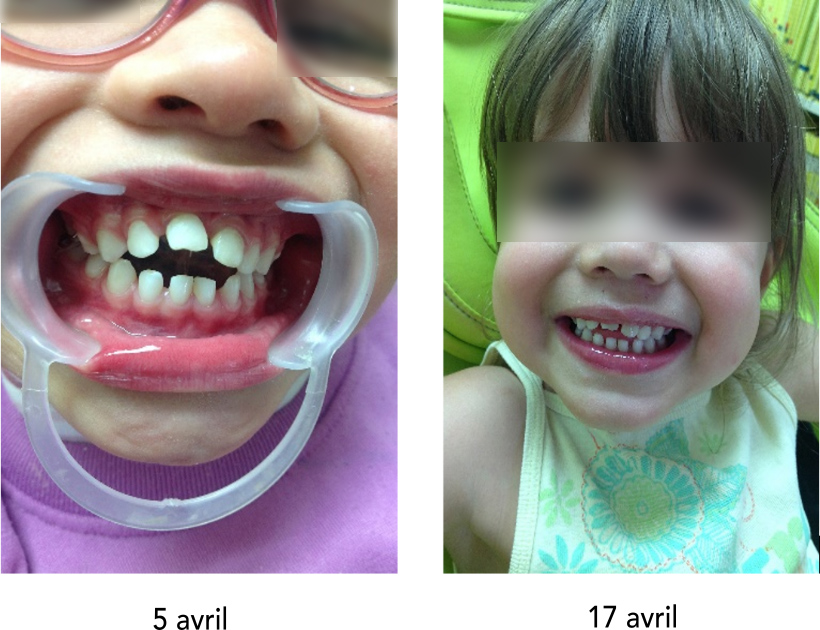 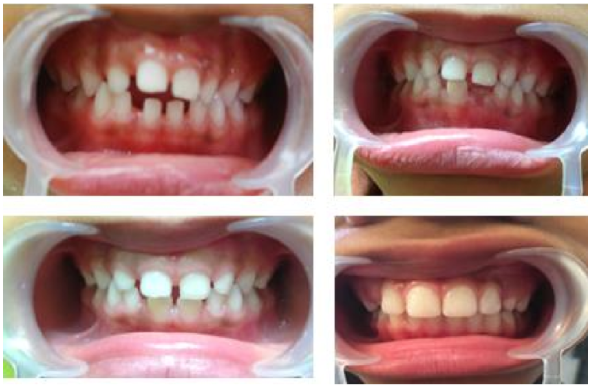 This patient came in at the age of 5 with dysfunction associated with an alveolar deformation. Functional balance was obtained in two months thanks to Froggymouth alone and the deformation was reduced by more than half.

There was then a spontaneous evolution between the ages of 5 and 8 years. Normalizing his functions led to a return to eumorphic growth and satisfactory occlusal and dental alignment.

Lymphangioma and multi-cysts in the oropharynx 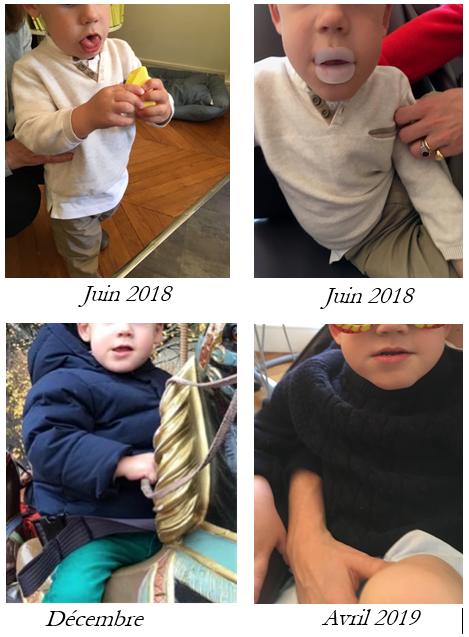 This patient came to Dr. Fellus with lymphangioma and multi-cysts in the oropharynx. According to his parents, his mouth breathing and his lingual posture had a real impact on his social life. An immediate change in his lingual posture was observed the first time he used Froggymouth.  After wearing it for a few weeks, his tongue was posteriorized, most of the time inside the oral cavity, and the apex was less prominent. This stage enabled the healthcare team at Hôpital Necker-Enfants Malades to postpone a glossectomy that had been scheduled. 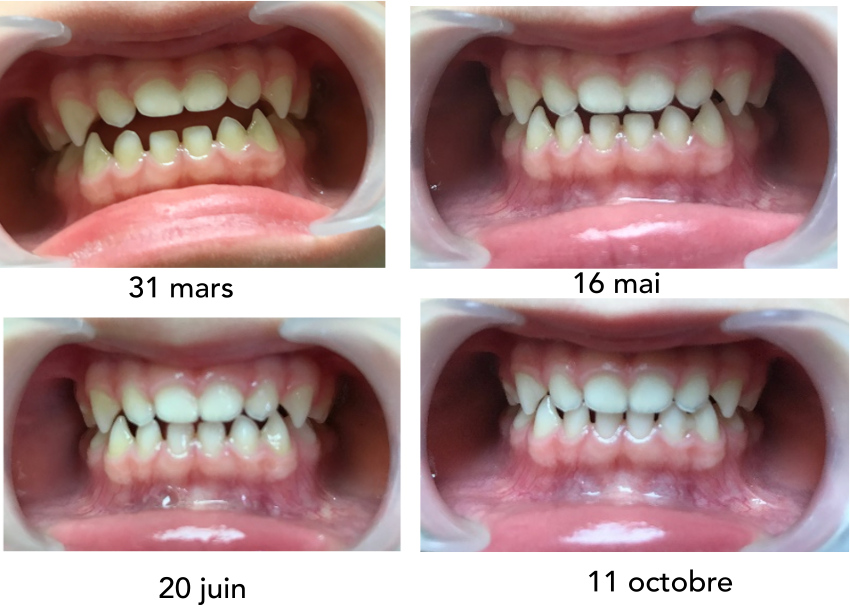 This four-year-old little girl showed an isolated incisal open bite. She wore the device between 31st of March and 1st of June. The dysmorphic feature continued to spontaneously correct itself, and the result obtained on 11th of October lets us foresee definitive physiological dental occlusion without any orthodontic intervention.

Clinical cases treated with froggymouth and other treatments​ 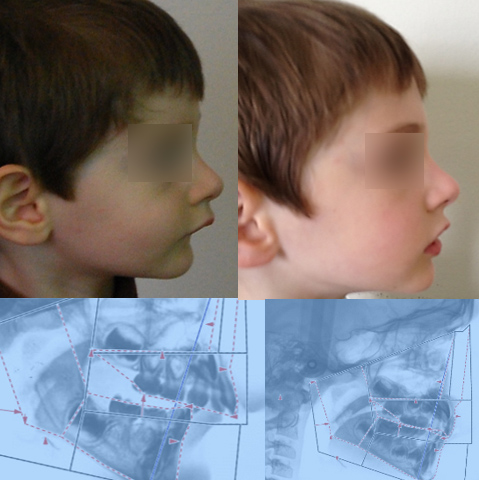 Marc was 4 when Dr Fellus suggested a different way of treating this severe retromandibulia – an orthopedic “toboggan” and the use of Froggymouth to stimulate the proliferation of pre-chondroblast cells and renewed mandibular growth.

Two year later, Marc is class I and will not be needing surgery. 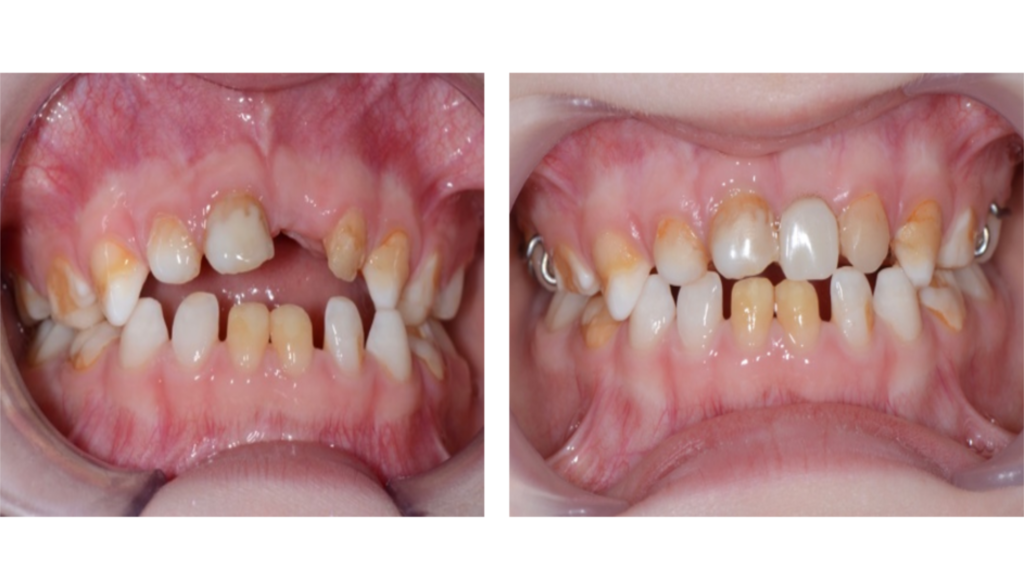 This four-and-a half-year-old patient, treated by Docteur B. Ngo, had imperfect amelogenesis and a canine-to-canine anterior open bite caused by sucking on a pacifier until she was four.

A rear hinge plate with molar planes was applied at the start of June 2018. The reverse occlusion was gone in three months. Then an upper dilator was applied in September 2018 and use of the Froggymouth began at that time. 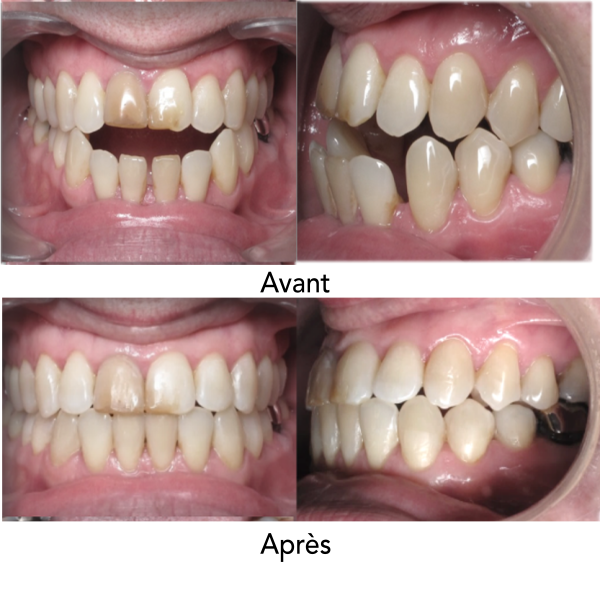 The treatment plan will therefore consist in getting the patient out of the dysmorphofunctional spiral through treatment to rehabilitate swallowing with Froggymouth and correcting the anterior open bite by egress of the incisors combined with retraction of the mandibular incisors and molar ingress.

At the end of treatment, the patient’s atypical swallowing was rehabilitated and the anterior overlap was acceptable. The patient still presents class I occlusion. Bonded wires were placed on both maxillae and regular monitoring is needed to prevent functional recidivism.

Extreme cases treated with Froggymouth only

Results on a patient with lymphatic malformation 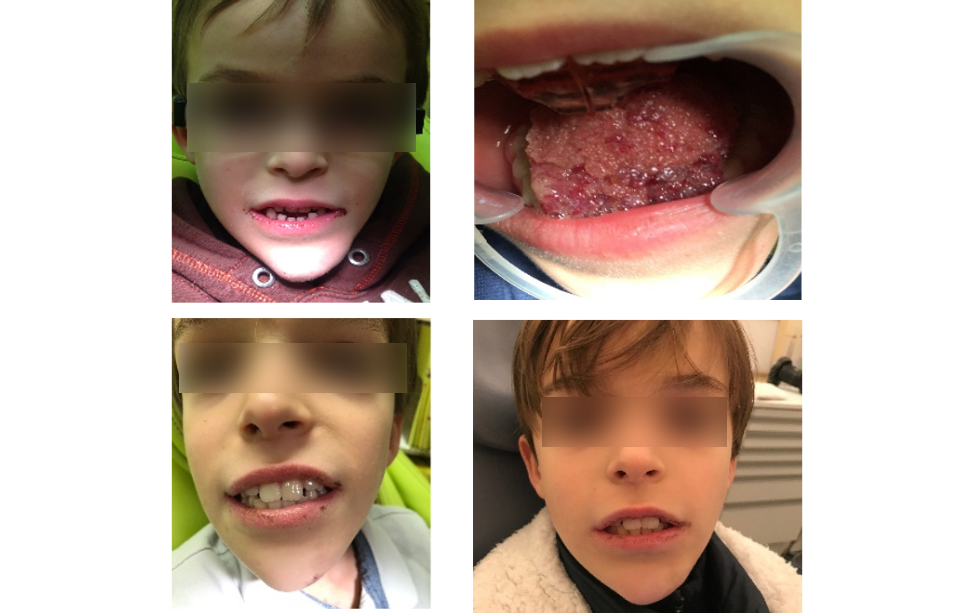 Lymphatic malformation (LM), formerly called lymphangioma, is a benign malformation of the lymphatic vessels that is hamartomatous in nature and is caused by the sequestration of lymphatic tissue that maintains its growth potential. Mandibular prognathism is brought about by an excessive lingual volume at the origin of an overly anterior dysposture. Wearing Froggymouth repositioned the rear section of the tongue, slowing mandibular growth and the anteriorization of the medium stage of the face.

Results on a patient with angioma 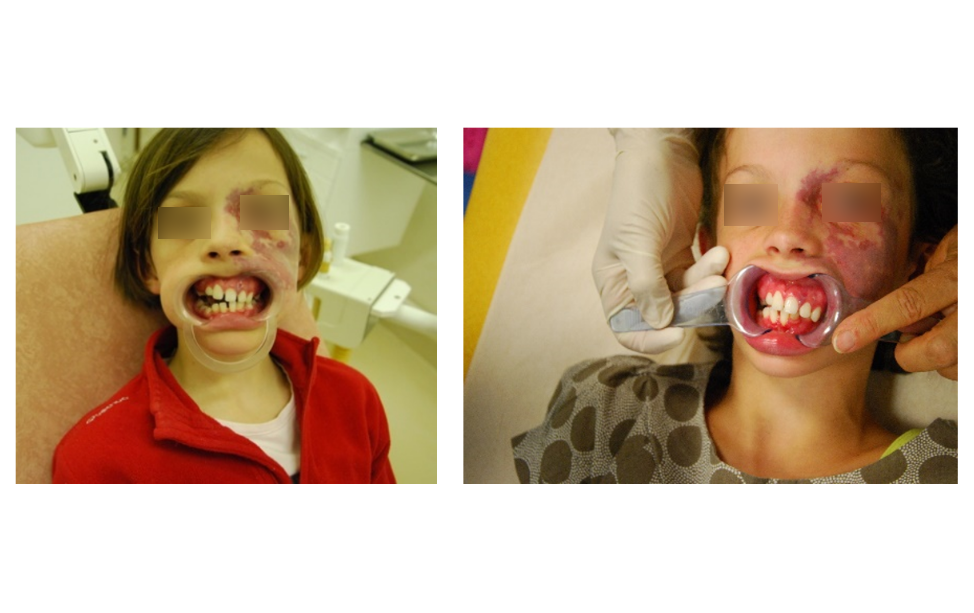 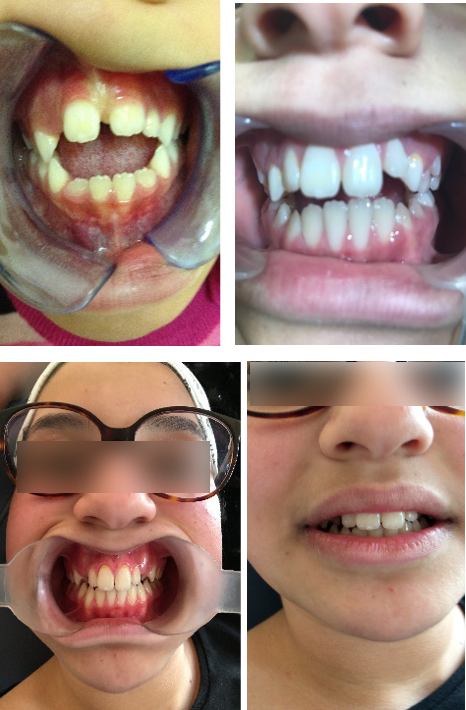 Narcolepsy-cataplexy is a highly debilitating sleep disorder characterized by uncontrollable sleeping attacks that can occur in the middle of an activity during the daytime, with a sudden loss of muscle strength and no loss of consciousness. It is mainly triggered by emotions (laughter, surprise, a funny story). The symptoms may range from a slackening of the facial muscles that is barely perceivable to a drop of the jaw or head, weakness in the knees or total collapse.

A large number of cases were diagnosed at Robert Debré Hospital after a vaccination campaign against the H1N1 virus. Related attention-deficit disorders make re-education difficult, with a high rate of failure.

The bottom-up approach provides immediate results with no constraints for the child.

It is interesting to observe that, out of all the patients examined, half had no deformations whereas there were major deformations in the other half. Questioning the parents showed that, when occlusion was good when the first symptoms of the disorder appeared, no doubt due to physiological swallowing, there was no changes in occlusion. Preexisting deformations, however, were almost systematically worsened.