To use the device effectively, the practitioner must be able to detect atypical swallowing and mouth breathing.

Atypical swallowing is characterized by:

–       contraction of the lip and chin muscles

These muscle contractions are the easiest to detect, especially when at rest. In order to study the patient’s automatic reflexes, it is important to carry out a visual examination before they sit in the chair, when they do not appear to be paying attention.

Checking the anatomy of the nasal passages is the best test, but Gudin’s test can also be used or, even better, Delaire’s aerophonoscope.

Gudin’s test, applying pressure to the nostrils, allows us to discover if this inability is chronic. The diagnosis is confirmed through careful study of the nasal passages which indicate parafunction.

I am also a firm believer in a simple test where you ask the child to breathe in very deeply. If mouth breathing is temporary, the child will attempt to inhale more air by dilating their nasal passages. On the contrary if mouth breathing is chronic, then the nose will narrow as a result of a pressure drop caused by forced inhalation. 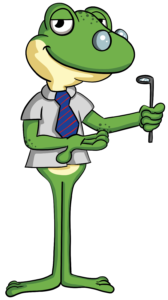 When should you use the device ?

Treatment of the dysfunction should start as soon as possible after atypical swallowing has been diagnosed if the patient’s anatomical environment allows for it. If this is not stable, make sure the tongue can find the physiological reference points seen in normal occlusion.

Example of a non-anatomical environment: Major narrowing of the maxilla prevents the tongue from positioning comfortably against the palatal arch.

What to Say, What to Do?

Device size should be based on a comparison of the distance between the corners of the mouth, not the patient’s age. When placed between the lips, Froggymouth should not stretch the corners of the patient’s mouth, since this leads to proprioceptive information being sent in this zone, which is not desirable. If in doubt, the smallest Froggymouth tested on the patient should always be used. For more information, click here.

Placement of the Device

We recommend that you do not give patients too many instructions during placement of Froggymouth, except to tell them to sit in front of the television for 15 minutes so their attention is completely focused on the screen, with a horizontal gaze and tongue. They must absolutely not talk with the Froggymouth in place or remove it, even if just for a second.

To ensure patient cooperation, you should explain why they need to watch television: if they were reading or using a tablet, their head would be bent forward, which would make them drool. If a family has no access to a television (due to vacation abroad or not having one at home), you can recommend using a raised computer screen, to ensure the mouth remains horizontal.

What to Look For? What to Say?

Start each appointment by looking at the patient before they sit in the chair to study their automatic reflexes (lips tight or relaxed).

Talk to the patient to see if they are still drooling while using the device or if this has stopped. It takes at least a week for this, since the comments are often: “I drooled to begin with, but not anymore.”

In this case, you can explain to the parents that, like a computer, the patient now has two distinct programs for swallowing. In order to choose the right program, they have to click on the right icon, like on a computer’s desktop. Tightened lips will call up the old program, whereas with closed teeth and relaxed lips, they will use the new one.

If the patient is still drooling, you must make them aware that saliva is pushed forward by the tongue, so generally the lips need to stay closed to prevent your clothes from getting wet – the saliva needs to go to the back of the mouth to be swallowed.

This route is very complicated when the saliva is in the middle of the mouth and may be sent directly toward the pharynx. Use of the styloglossus is essential in getting this sequence right.

This muscle raises the top of the tongue up and backwards while reducing its width, and has often never been used.

What to Do? Arm Wrestling exercise

To combat this, use the following exercise: press down on the tongue behind the lingual V with a mirror, and ask the patient to fight against the mirror and push it upward. The tongue will take the shape of a rugby ball.

By repeating this exercise two or three times, a new motor image will be formed. Once the patient achieves this task, ask the parents to monitor their child’s lip position.

If activation of the styloglossus takes some time, this monitoring step could be moved to the third session.

Étape 3 : role of the parents

The cerebellum is linked to the brain by a bridge of nerve fibers and acts as the body’s center for movement coordination. It controls the duration, magnitude, and order of movements based on the information received about action that is in progress. The parents play an important role in ensuring the motor sequence becomes automatic quickly. This sequence is controlled by the cerebellum, which detects and corrects differences between the intended movement and the actual movement, and the lymph nodes, which delete incorrect data and prepare the next movements.

What instructions should parents (or partners, for adult patients) be given?

In the same way that it is easier for the patient to control their lips than the 17 muscles that make up their tongue, it is even easier for parents to monitor their child’s lips than their swallowing action.

They just have to say, three times a day: “yes, you got it” when their child swallows without contracting their lips; and three times a day: “watch out, your lips are tight.” This method is much more effective than spending their time correcting their child. And this also stimulates the cortico-cortical loops in the cerebellum, with one correcting wrong movements and the other refining the right sequence.

It is important to get parents involved, beyond the choice of a practitioner. Successful treatment needs three people working in a team: the patient, the practitioner, and the parents.

What to Look For?

Before the patient even sits in the chair, check how relaxed the lower face is, which shows that the action of the trigeminal nerve has replaced that of the facial nerve. Our primary focus is on the need for trigeminal stimulation and facial nerve inhibition, unlike many other treatment plans which seek to encourage contact between the tip of the tongue and the retro-incisive papilla.

Passing the tongue over the lips, even once during the consultation, shows that this step has not yet been learned and that the lips are being treated as a mucous membrane and not keratinized tissue. All dermatological signs should be interpreted in the same way.

The lower face should be completely relaxed– this is even more important than the lack of bilabial contact. Let’s consider the three photos below. In the photo on the left, we can see that the lack of stomion is caused by the contraction of the muscles that raise the upper lip.

These muscles are innervated by the facial nerve. In the middle image, this retraction is less visible. On the right, the lips seem to be touching but there is no muscular contraction. This is a correct posture.

Observing the position of the tongue during phonation is an important way of judging the level of automatization.

Non-physiological activation of the muscles raising the upper lip

The final way of judging the level of automatization is the phonation test.

Ask the child to count from 1 to 20 out loud and observe the tongue position: if the sounds are made by the lips, the tongue will not appear beyond the dental arches. When they need to swallow, the child will just need to close their teeth and use the new program.

If, however, you see the tongue appear between the dental arches, this means that the sounds are being modulated by the tongue. When swallowing, it will be much more comfortable for the child to go back to the old technique than close their teeth (keeping the top teeth away from the bottom ones), move their tongue to avoid biting it, swallow, open their mouth again, and move their tongue forward to continue speaking.

There are two simple exercises to alleviate this stigmatism: get the child to count from 1 to 60, once a day, with their teeth closed. They will be forced to move their lips and understand the importance of labial dynamics. After one week, get them to count from 1 to 60 without closed teeth, but closing their teeth between each number, and gradually speeding up.

Initially, the tongue will be able to escape laterally and then return to the mouth, but very quickly the speed of speech will not allow for this and the tongue will find its place within the dental arches. The exercise should be supplemented by asking the child to suddenly close their teeth during conversations. The aim of this is that the tongue will feel insecure if it starts to move between the teeth again.

Once the sequence is integrated into the body’s pattern, the device can be worn less and less. Wearing it once a week for 3 months has been shown to be beneficial. Parental monitoring of the posture can be reduced and one reminder per day will be enough.

Back to the results
Froggymouth Congress | May 14, 2022
An online congress on Passive Orofacial Myofunctional Rehabilitation
First 1.000 tickets are free of charge
More information & registration
Scroll to top